There’s a new strain of c 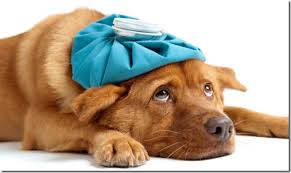 anine flu in the U.S., and it has some pet owners worried about their furry family members.

More than 1,000 dogs caught the illness during a recent outbreak in Chicago, and infections are reportedly emerging in other states, including California. But the H3N2 canine flu — not to be confused with the seasonal H3N2 human flu that sickened so many people last winter — is no cause for panic, experts say.

Most dogs won’t get seriously ill if they catch dog flu. What’s more, a contagious virus in dogs is unlikely to spread rapidly (as flu can in people) because dogs simply aren’t as mobile, or as social, as we are.

“In humans, this would be a pandemic virus,” said Colin Parrish, a virologist at Cornell University’s College of Veterinary Medicine and member of an informal task force tracking the canine flu’s spread and effects. “But dogs don’t fly around the world in large numbers and shake each other’s hands. Because they don’t have the same social structure as humans, the viruses spread more slowly.”

There are two types of dog flu. The first, H3N8, is nearly identical to a virus that has been known for more than 40 years to infect horses. The virus adapted to dogs, first infecting them in the U.S. in 2004, according to the U.S. Centers for Disease Control and Prevention.

The second dog flu, H3N2, is a mutated version of a virus that occurs in birds, and was first found in dogs in Asia in 2007. It appeared in the U.S. last month. Although it’s not fully known how it made its way here, Parrish said some believe that it may have been carried over during the rescue of dogs being raised for meat in South Korea.

The American Veterinary Medical Assn. reports that dogs that are sickened by canine flu fall into two categories: those with a mild form (causing coughing, lethargy and sometimes a nasal discharge) and those with a more severe version accompanied by high fevers and pneumonia. Some dogs can catch the flu and not have symptoms at all.

Dogs that get sick from canine flu can be treated with supportive care such as antibiotics for secondary infections or fever-reducing medications, and most get better in two to three weeks. Fewer than 10% of dogs confirmed to have canine flu die as a result of the infection, the CDC says.

Although a vaccine is available for the H3N8 strain, scientists don’t know whether it would prevent H3N2 infections, Vishkautsan said. She said that she doubted it would, because of differences between proteins in the two flu types.

Dogs at the highest risk of contracting canine flu are those that have the most contact with other dogs, often in such locations as boarding kennels, doggy day care and animal shelters.

Both Vishkautsan and Parrish said they had heard reports of at least one confirmed H3N2 dog flu infection in Southern California, but they didn’t have details.
Crucially, canine influenza is not known to have ever infected people — though it was reported to have sickened some cats in South Korea in 2010. The CDC calls the viruses “a low threat to humans” but will continue to monitor them both, in case either mutates and gains the ability to infect humans (as the pandemic H1N1 swine flu and the deadly H5N1 bird flu did in the past.)

To prevent infection in pets, owners should exercise caution before taking dogs to locations where other infected animals are likely to be. Hand washing can also help halt the spread of disease. And if dogs do develop symptoms, owners should keep them away from other dogs.