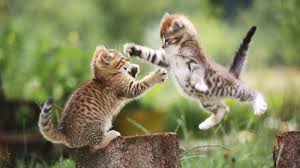 Want to adopt a cat, but you’re allergic to cats? You say you’re prepared to take antihistamines, and you have a HEPA air filter in your home?

Some cat breeds are considered more “hypoallergenic”  than others. Cats do produce cat dander, an allergen, but the real problem for the estimated ten percent of the population who are allergic to cats may be a protein, Fel d 1, that is present in cat saliva and on cats’ skin.

Truth is, there are no 100% hypoallergenic domestic cats. But some may produce less Fel d 1.   Additionally, male cats usually produce more of the Fel d 1 protein than females, especially if they aren’t neutered.  Here’s a list of those cats which are considered to be more hypoallergenic than others: